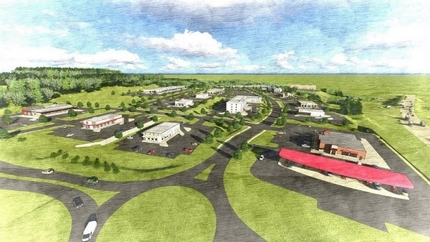 “This grant will allow for development of safe roadways leading to the planned development of an 84-acre parcel of land located in Fairview Township right off Interstate 83.  This mixed-use development project will mean feature hotels, casual dining, commercial offices and retail establishments, but most importantly it will mean jobs for the people of York County,” said Saylor. “I am proud to support this grant, which will help York County continue to grow and prosper.”

The multimodal grant will aid in the construction of a single lane roundabout at the current safety-deficient intersection of Lewisberry Road, the I-83 South ramps and the proposed primary entrance to the development.  Additionally, two township roads, with sidewalks, will be constructed in the development.  The Multimodal Grant Program was established under the transportation funding package in Act 89 of 2013.

A Florida developer has unveiled a large commercial concept plan that could remake the Lewisberry Road exit of Interstate 83 near the Pennsylvania Turnpike in Fairview Township.

Elysian Partners LLC, owner of the sprawling Cumberland Technology Park in Hampden Township, has plans to develop a vacant 84-acre tract it owns at the southbound off-ramp of I-83.

The early plan calls for 16 buildings and about 360,000 square feet of commercial space, including six restaurant pads and three hotels. The development, which has been dubbed Fairview Crossroads, also could include professional and medical offices, a daycare, flex industrial buildings and a pad for a convenience-store and gas station.

“It really is a concept right now,” said Kevin Brown, a partner at Elysian. “It will depend on who comes at us.”

Aside from the hotels, the proposed structures on the site would all be fairly small, all but one are under 10,000 square feet. There is no residential component included in the plan.

Elysian plans to submit its land development plans to Fairview Township later this year, Brown said. However, he doesn’t expect any dirt would start moving on the tract until 2019, possibly late 2018, due to heavy transportation improvements needed around the site.

Those improvements, which would require state approvals, would include a proposed single-lane roundabout at the intersection of Lewisberry Road and the I-83 south ramps. The roundabout would include a right-turn bypass lane for the northbound approach on I-83.

Full build out of what has been proposed on the tract has been estimated at more than $59 million, Brown. That figure does not include the transportation improvements, which may involve state funding.

“We want to see what is available,” Brown said. “The substantial improvements on Lewisberry Road and the I-83 offramp, they exist whether we do this project or not.”

Elysian has not established a timeline for full development of the land, though Brown did say construction would occur in phases, likely over several years.

“It really is a much more gradual plan,” he said.

The developer has estimated that construction activity on the site could support 720 construction jobs and the final project may create 550 permanent jobs. Development could generate about $3.6 million in annual state and local tax revenue.

A Florida developer wants to build a $59 million development, including restaurants, shopping, hotels and offices, on 84 vacant acres in Fairview Township.

The site is north of Lewisberry Road, near the exit of Interstate 83 and the Pennsylvania Turnpike.

The thousands of cars traveling the Turnpike and I-83, including York County residents heading to jobs in Harrisburg and New Cumberland, make the site a “unique” location for this type of development, said Kevin Brown, a partner at Elysian Partners.

More: Penn Market in York gets a new owner

Traffic improvements associated with the project include creating a single-lane roundabout on Lewisberry Road and the ramp to I-83 south. The plan also includes widening Lewisberry Road to the north to create a turning lane off the I-83 interchange.

Construction is scheduled to begin in 2019, or perhaps 2018, pending approvals from Fairview Township. Elysian expects to file a land development plan with the township later this year, Brown said.

The first buildings would open in 2019. It’s premature to talk about possible tenants at this point, Brown said.

The project is slated to generate about $3.6 million in local and state taxes annually.